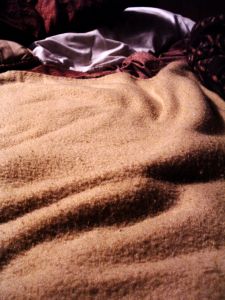 “Mary was espoused to Joseph, before they came together, she was found with chi;d of the Holy Ghost. . . . While he [Joseph] thought on these things, behold, the angel of the Lord appeared unto him in a dream, saying, Joseph, thou son of David, fear not to take unto thee Mary thy wife.” Matthew 1:18-20

It was 3:00 o’clock in the morning. Jerry lay in his bed in a cold sweat. His stomach was in knots. He had been asleep but woke up with a heavy problem on his mind. He was worried about a decision that he had to make and he knew that it would affect a lot of people. It truly was a serious matter and he did not know what to do. Much of the problem was out of his hands. He could not change how the other people had acted and what they would say or do about his decision. Jerry was really worried.
Not knowing what else to do he got out of bed and found his Bible. He had heard that many people find peace and comfort from its words. He began reading in the first book of the New Testament. Matthew chapter one did not impress him at first. There was this long list of names. He was sure that they served some purpose but at the moment he could not fathom what it could be. A few verses later, however, he found something that he recognized. The Christmas story. He knew it from his childhood Sunday school class. It was telling the story of Christ’s birth from Joseph’s point of view. Jerry had not read far when he realized that Joseph had a big problem. He was espoused to Mary. That meant that they were all but married and now Mary is going to have a baby that was not his! How could she be so wicked! He must have felt tremendously betrayed. What was Joseph going to do? Jerry could just about imagine the turmoil in Joseph’s heart. It must have been something like what was in his heart at the moment. As he kept reading Jerry was interested in the words of the angel to Joseph. “Joseph, thou son of David, fear not to take unto thee Mary thy wife: for that which is conceived in her is of the Holy Ghost.” (Matthew 1:20) God was accomplishing many things through Mary’s circumstance. She was not sinful in this. It was in God’s plan so Joseph should continue with the marriage and love and protect Mary. As he contemplated Joseph’s unease, Jerry realized that his difficulties were also in the hand of God. The angel told Joseph to “fear not.” If God is in control there was nothing for Joseph to fear. In like manner, God was in control in Jerry’s life so he also had nothing to fear. God was working all things out in His own good time and pleasure.
The angel spoke peace to Joseph’s heart that night. Jerry also found peace as he read and thought about the Word of God in his night of turmoil. Joseph rose from his sleep and obeyed the direction of the Lord. Jerry went back to bed and fell asleep trusting his problem to the good hand of God.
Child of God as we commit our way unto the Lord we find peace in obedience and trust. Jerry had no way of knowing how God would work his problem out. He simply had a peace that God would work it out and accomplish His own good will. Let’s trust and

Fear not, to trust the workings of God in our lives.

Genesis 50:20
“But as for you, ye thought evil against me; but God meant it unto good, to bring to pass, as it is today, to save much people alive.”