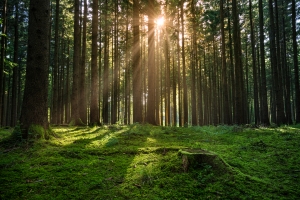 March of 1942, was a dark time in the Philippines. It was especially dark for over 140,000 foreigners who were living there at the time as Teachers, businessmen and missionaries. One of those missionaries was a lady named Mona Kimmery. General Douglas MacArthur, after struggling unsuccessfully to fend off the Japanese invasion, left the islands with the promise, “I shall return”. He repeated that promise over and over again for the next two and one half years. Miss Kimmery suffered many things in the internment camps. But, the promise of General MacArthur gave her and the many others who were held captive there courage and hope.

The prophet Zechariah preached to his people hundreds of years before the day of the Lord Jesus. His message was that one day God would send His King to them to rule and release them from their sin. In Jesus’ day Israel was dominated by Rome. As Jesus came into Jerusalem one day riding on a donkey, the people cried out “Hosanna, Blessed is the King of Israel.” The word “hosanna” means “save us” or “deliver us”. Matthew, rightly recognized this as the fulfillment of Zechariah’s prophecy. “Rejoice greatly, O daughter of Zion; shout, O daughter of Jerusalem: behold thy King cometh unto thee: he is just, and having salvation; lowly, and riding upon an ass, and upon a colt the foal of an ass.” (Zechariah 9:9) The people were hoping that Jesus would raise an army and throw off the yoke of Rome. It was not time for that. First, Jesus would die for our sins. There is coming a day however, when He will return, receive us to Himself and in His time set up his kingdom. As believers, we sometimes, become overtaken with the burdens of this life. We must remember that Jesus is coming again and will establish his rule over this world. As the internees in the Philippians looked for MacArthur to keep his promise. We wait for the coming of our King Jesus. Earthly promises are imperfect. Many people died before the General could deliver them. When Jesus comes in the sky to claim his children, his coming will be timed perfectly and we will be with Him forever. Child of God, take courage . . . .

Fear not, behold thy King cometh.

John 14:3
“And if I go and prepare a place for you, I will come again, and receive you unto myself, that where I am, there ye may be also.”