“But straightway Jesus spake unto them, saying, be of good cheer; it is I; be not afraid.” Matthew 14:27 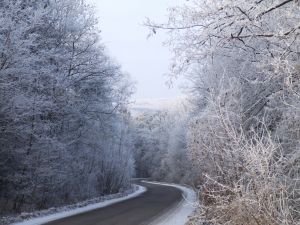 The day had been challenging and long. The Lord Jesus Had spoken to thousands of people buy the Sea of Galilee. Before he sent them away He fed over 5,000 of these people with only a few fish and loaves of bread. As the day wore on, darkness began to settle over the sea. Jesus sent His disciples by boat across the water and went Himself, “up into a mountain apart to pray.” (Vs. 23) The disciples began their trip but as the “ship was in the midst of the sea, [it was] tossed with waves: for the wind was contrary.” The night was dark. The wind was harsh. The sea was threatening. In their terror they looked out and saw the form of the Lord Jesus coming to them upon the water. They cried out for fear but Jesus was coming to help them get to safety. When He joined the boat the wind ceased and they were all safe. He challenged Peter by saying, “O thou of little faith, wherefore didst thou doubt.” and they worshiped Him.
This story came to the mind of a missionary one dark and very cold night on his was back home from a deputation meeting in Pennsylvania. It had been good weekend. He had been preaching and the Lord had blessed the meetings. He was now driving through the dark country side on his way home. It was in the winter time and was very cold but he was still happy because of the blessings of God on his preaching. The road was clear of traffic but he began to notice that the snow on the side of the road had begun to melt during the day. The melting water had run across the road in different places and he realized with a start that he was driving over black ice; random spots of ice formed by the melted water. As he started down a hill he noticed that at the bottom of the hill were dairy barns on each side of the road. Just after the barns the road took a sharp turn to the left. Between him and the turn, in the dark shadows of the barns, the road was covered with ice. He noticed his speed and realized that making the turn at the bottom of the hill was going to be very hard and dangerous. As the corner approached he prayed for God’s protection and was amazed as the vehicle made its way safely around the corner. The rest of the trip he seemed to hear the words of the the Lord Jesus saying, “Be of Good Cheer; it is I; be not afraid.” The trip was long and would have been lonely were it not for the presence of Jesus in the vehicle with him.
The disciples made it home that night and the missionary made it home that night also 2000 years later. Though they both had passed through dangers the Lord Jesus went with them to protect and encourage. “The angel of the LORD encampeth round about them that fear him, and delivereth them.” (Psalm 34:7)
Child of God, we need never fear being alone, because in our darkest and most dangerous hours the Lord sees and protects. Nothing can happen to the one sent by the Savior to accomplish a task till that task is accomplished. Then we rest in His perfect plan as we hear his words,

“Now unto Him that is able to keep you from falling, and to present you faultless before the presence of His glory with exceeding joy,”
Jude 24